Do independent and activist bloggers see themselves as journalists in the digital era? 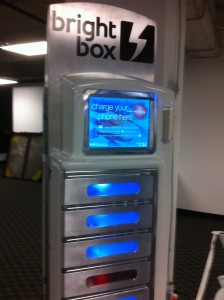 Bright Box is a charging station for iPhones and Androids at the PPL, a workspace at the DNC for independent bloggers

Pundits claim that the Internet has changed everything about this election – from Big Bird/Binder/Bayonet memes to Big Brother Data on your voting habits. But what about how independent and activist bloggers see themselves as journalists in the digital era? One of the birthplaces of political movements and Internet reporting is the Independent Media Center (IMC) with the 1999 Battle in Seattle protests against the World Trade Organization (WTO). When I was in Charlotte in September of this year during the protests against the Democratic National Convention, I reflected on the transformation and blurring of activist and mainstream digital reporting. As I went from a documentary filmmaker in Seattle to an academic researcher and blogger in Charlotte, I offer a first-hand account. My musings are in a blog post here in Mobilizing Ideas, a social movement studies blog, which is part of The Center for the Study of Social Movements at the University of Notre Dame, editorial home of the academic journal Mobilization.