This provocative phrase kept showing up on my Twitter feed. The article was one of many that splashed news headlines after the Pew Research Journalism project issued a report on the news habits of Americans.

But the word “source” kept bothering me, so I first tweeted,

No, most Americans don’t get their news from Facebook. They get it from news outlets whose stories end up on Facebook http://t.co/Zh53YuBemR

That felt unsatisfying. Plus, I was on vacation (ok, a working vacation), so I tweeted out what I really felt:

An hour later, I checked my Twitter feed while procrastinating on an article rewrite and noticed that it was getting a lot of buzz. By last account, it had been retweeted 65 times. I know, I know, that’s nothing for today’s Twitter “influencers” who regularly get hundreds of retweets. I do not spend endless hours on Twitter thinking of witty quips to post because I am, well researching social media. With this many retweets, though, I knew I had hit a nerve with this one. And what is that nerve? With all of the talk of algorithmic filters and the disruption of news outlets, what often gets left out of the discussion is that it takes labor to report, write and edit news articles on a regular and consistent basis. Facebook is not a news production platform, it is a news distribution mechanism. People are getting most of their news from journalists, not from Facebook. There, I said it. 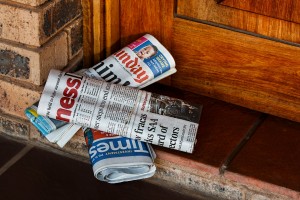 Regardless of what the filtering mechanism is, it is journalists, not Facebook coders, who are pounding the streets, virtual or otherwise, and risking their lives, in some situations, to bring you the news. There continues to be this air of derision of “traditional” journalists, often implied as old, stodgy, and anti-tech while social media platforms or online-only news outlets are viewed as modern, individualized and current. The problem is that producers, and people, are often left out of this new(s) equation of bringing “personalized” news to your virtual doorstep. Well, mostly.

In response to the Pew survey, this recent New York Times profile features a Facebook news engineer who is one of many at the company who manipulates news feeds with an “algorithm,” yet they are also people who write, and therefore produce, the code for that filter. So in some respects, just  like the paperboy biked all over town (perhaps with bad aim) to deliver your newspaper, Facebook employees are working to deliver your news (also with bad aim). Again, though, the labor is in delivery, not production of news.

The paperboy was not good at deciding what was newsworthy. Neither is Facebook or their algorithms. We all tend to share online more sensational pieces than the everyday coverage of schools boards or city councils. But it’s this day-to-day reporting that is essential for any semblance of a democracy.

The New York Times profile of the Facebook engineer opened with this lede: “Many of the people who read this article will do so because Greg Marra, 26, a Facebook engineer, calculated that it was the kind of thing they might enjoy.” But really, many of the people who read the article did so because Ravi Somaiya, a New York Times journalist, reported and wrote it.

@jsilland @schradie And obscures some in the process! So it’s like your paperboy cutting up the paper, while wearing many ads.

Other replies, though, found the collaborative and personalized Facebook news hive mind so much more sophisticated than the prepubescent paperboy. But at the end of the day, or maybe in the morning since afternoon newspapers have disappeared, Facebook’s dominance in news delivery is more Big Brother than Big Love:

* Note: Yes, I thought about making the term paperboy more gender neutral but the male comparison is apt with male dominated tech companies, like Facebook.

Is Moral Monday the Tortoise and Occupy the Hare?
Bringing the Organization Back In: Social Media and Social Movements