The IRB at the DNC: Interviewing is (usually) no laughing matter

A friend of mine had flown in for just 24 hours of the Democratic National Convention (DNC), so I was showing him the highlights: no, not the Convention floor nor even the Huffington Post spa (yes, you heard that right). Instead, we were wandering around the other media circus – mega TV screens near the infamous “CNN Grill” and the MSNBC stage of live commentators in uptown Charlotte. 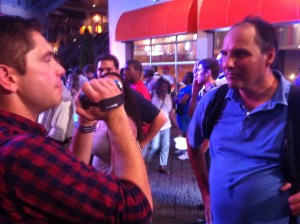 As we were gawking at the gawkers, I noticed a clean cut young white guy holding a small camcorder. He was interviewing a woman and asking her questions, such as, “What specifically do you think Obama has done for this country?” I then looked at his shirt – no lanyard or identification hanging from his neck. While there were certainly a few DNC tourists wandering around without “credentials,” they were a rarity. The police barricades and Homeland security presence made walking around Charlotte without credentials and ID as dangerous as trying to, well, vote now without your ID.

Journalists, in particular, had heaps of tags hanging on their shirts, so why would a tourist be asking questions of bystanders?

I was curious, and quite honestly suspicious. So I did what any sociologist would do, I asked him what he was doing.

He then put the camera up to my face and asked if he could interview me. I declined, so he asked my friend, who was game.

I had time to snap a photo of them, but before I could ask any follow-up questions, he darted away into the crowd.

Of course, I looked him up and found that Revealing Politics is a kind of “gotcha” conservative site of video interviews featuring, yep Caleb Bonham. One of Bonham’s videos has over 225,000 hits on YouTube. His twitter tagline says he’s an aspiring comedian.

Other comedian interviewers were at the DNC asking similar questions. The first night of the convention, I went to a taping of The Daily Show with Jon Stewart, where they played a video clip of John Oliver and other “reporters” interviewing DNC delegates about what Obama had accomplished.  The comedy bit focused on an interview with a woman I had recently interviewed, as well, for my research. Of course, I probably wasn’t as funny. But with both interviews, she knew what she was getting into. With Bonham, these other DNC attendees hadn’t.

But why didn’t they ask?

Before academia, I was a documentary filmmaker, and it never ceased to amaze me how eagerly many people responded to video cameras. Once, my videographer and I got into a Tiger Woods golf tournament in the Philippines while making a documentary because we were assumed to be from the media – why else would white Americans with cameras be there? Certainly not to ask Tiger Woods about a controversial golf resort development 100 miles away. Tiger did serve as good satirical fodder for the film, though.

So I understand what Bonham is trying to do. Yes, you heard that right. I don’t agree with it, but I understand his goal for satire, if that is what it really is.

But as an academic, who has three, yes, three pages of consent forms I’m required to get interviewees to sign, I wanted to scream at Bonham, “You’re cheating!” 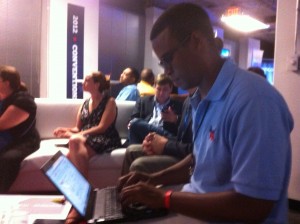 The previous few days in the blazing North Carolina humidity, I was walking around asking people for interviews – but only if they signed on the dotted line, and then the other dotted line, and initialed here and here.

The Institutional Review Board (IRB) at universities require academics involving “human subjects” – i.e. people – in their research get approval via a laborious application process that then results in a laborious consent signing process. It’s no laughing matter.

Certainly, there’s a middle ground between Bonham and the IRB. One can hope.

As for me, I can’t do standup during my interviews, but another comedian for Comedy Central, Jordan Carlos, did use my laptop to live tweet Obama’s DNC speech. Will I be funnier now when I write on it?