I just got back from our annual American Sociological Association Conference, and the Twitter feed (#ASA2012) was particularly snarky.  As I read expletive-filled tweets from (tenured) faculty and sarcastic tweets from graduate students, I was both bemused and intrigued. Some simply contained nerdy references, such as one thread about The Game of Thrones, which I heartily participated in:

Others were more social in nature, about various receptions and after-hour meetups, or my tweet about the annual (and notorious) UC Berkeley ASA party:

And with sociologists, anything is on the table, so the term “sex” was sometimes used in tweets, not to describe the cliched conference “sleeping with people you’ve read,” but in referencing panel titles or content. In the process, though, it invited lots of porn spambots on the ASA twitter hashtag. Many tweets, though, engaged with the substantive findings and theories debated during the course of the conference. People who could not attend the conference tweeted in gratitude that others were tweeting research and findings presented at the conference (fyi – you can follow a conference’s tweets by searching for the hashtag for that event). 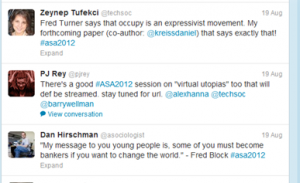 As a scholar of social media, how could I not ponder the meaning of this twitter feed? Of course, other sociologists have already collected and analyzed it. Neal Caren from UNC-Chapel Hill, posted an incredibly useful CSV file of all of the conference tweets. And Dan Ryan, from Mills College, created beautiful visualizations of the #ASA2012 twitter feed.  A conference twitter feed is neither merely a “backchannel” nor a complete picture of offline happenings, as I recognized many of the tweeters as over-represented by new media scholars.  What I find compelling, though, is what does it all mean for academics to tweet (or blog or …) in terms of one’s publishing?

Academics face many challenges in navigating this rocky digital terrain that goes beyond whether or not to accept a Facebook friend request from an undergraduate.  I occasionally use Twitter (more so at conferences), and I now blog for Mobilizing Ideas, an online outlet for the social movements  journal Mobilization. I also started my own blog here, which has occasionally been picked up by commondreams.org. But there were many questions at first. Should I set up my own blog at Huffington Post or the Daily Kos?  Or perhaps the less overly political at OpenSalon.com? All of these sites enable just about anyone to set up their own blog. I am still sorting that out and trying to consolidate my four different blog sites.

And by working with my university’s news center, my social media use has generated old and new media coverage of my research. But where is this all going? Pure public intellectual (or public sociologist) endeavors? Or a big waste of time where others will steal my ideas before I can get them published? (which others have often cautioned me against). I simply think public digital engagement is now simply part of being an academic – or at least it should/will be.

While being a digital public intellectual may also seem risky (too much personal or controversial information), I have already experienced the benefit of the feedback, as well as the intellectual-public engagement, that stimulates an often isolated lifestyle as an academic. One of my postings, “Why Tents (Still) Matter for the Occupy Movement,” on Common Dreams, was cited in a peer-reviewed academic journal (American Ethnologist), but what that means for my own publications record (or eventual tenure where-ever that may be) is still up in the air.

This summer I participated in a summer institute at UC Berkeley on preparing future faculty. For this institute, I was part of a group that prepared a presentation on what new media means for academics. I took up the issue of how it impacts publishing. (Ironically), we had to present our projects via a cardboard posterboard, and below is my outline for it. I drew on sources listed below, including a great piece by Jessie Daniels and Joe Feagin.

To Blog or Not to Blog (or Tweet or…)

-Can take time away from research

-Risk disclosing too much personal information

-Engage and educate the public on academic theory and research

-Gets your name circulated among other academics

– Not credited much but varies by discipline and university

– MLA has developed standards for tenure and promotion

– Often classified as “public dissemination of research” or “service”, rather publication

– Document the digital, including citations of your digital work

– Put it on CV and mention citations, comments and hits 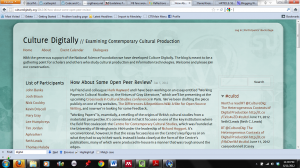 Future (and Challenges) of Digital Publication

-Can get your ideas out first by self-publishing on digital outlets, like Scribd or      Technical Report

– Print is disappearing, and publishers are experimenting with books on-demand and other formats

– Audio, video, slideshare and other digital production for data collection and research are  already there, so digital distribution is not far behind.

The (Coming) Social Media Revolution in the Academy by Jessie Daniels and Joe R. Feagin

Guidelines for Evaluating Work in Digital Humanities and Digital Media

[And just reminded by Norton Sociology of Should Every Sociologist Blog?  Also, Kieran Healy’s oldie but goodie: On Wasting One’s Time]

One Response to Will Academic Digital Publishing Make You Perish?