By schradie on February 1, 2016 in Big Data, Social Movements, Twitter 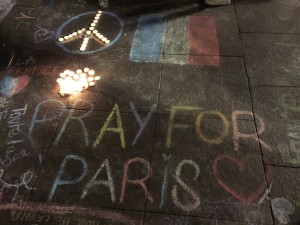 On Friday night, November 13, I had just left a movie theater near my home in Toulouse, France, when I received an e-mail from a friend asking me if I was OK. Curious, I went on Twitter and immediately saw reports from French news agencies that there had been a series of attacks across Paris.

My first reaction was to try to follow the Twitter stream of the events based on any emerging hashtags. I looked at what was trending in Toulouse and nothing pointed me to the attacks. I soon saw that #fusillade, which means “shooting,” was trending. I began to receive a lot of requests from American friends for more news, so I began to tweet in English with another hashtag being used by both French and English Tweeters: #ParisAttacks. Others started to use the French version #AttaqueParis.

Because there were so many ongoing immediate crises across Paris within the first 24 hours, very specific hashtags emerged to meet a variety of needs. These included #PorteOuverte, where people were opening their doors to people who needed shelter, and then the heartbreaking #RechercheParis to search for family members and friends missing after the attacks.

Over the next few days, I began to notice dozens of other hashtags around the event. As I was trying to sort out my reactions, questions, and responses to the attacks, I realized that the lack of a unifying hashtag similarly reflected the complex reaction in France and around the world.

5 reasons why online Big Data is Bad Data for researching social movements
The false media focus on violence: If it bleeds it still leads