By schradie on April 4, 2014 in Documentary Filmmaking, Silicon Valley, Uncategorized 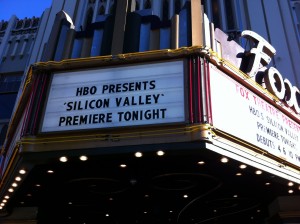 I had the opportunity to see the premiere of the new HBO comedy series, Silicon Valley in, well, Silicon Valley. It was a red carpet night, not just for the stars and producers of the show but also for tech leaders, such as Elon Musk, Mark Pincus and Michael Arrington. Yes, these elites are men. And it’s that gender lens that I was curious about as I shot video on the red carpet, watched the first two episodes in the Fox Theater, and went to the HBO after-party. 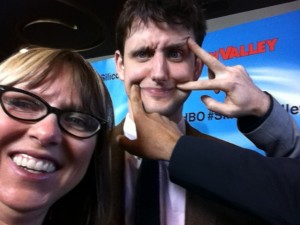 I must say, off the bat, that I am rooting for this show. I laughed throughout it, though I admittedly didn’t get all of the insider Valley and programming jokes, which the local tech crowd adored. And some of my favorite comedians are in the show, such as Zach Woods, formerly of The Office. They were all cracking jokes on the red carpet, including this selfie of Woods and me.

But I just couldn’t get over the show’s representation of women.

Of the cast of nine, there was one woman in the first two episodes. One. Well, ok, two if you count a stripper’s cameo. Another is apparently on the horizon. But to launch the show with only one woman character, Monica, who appears as an assistant to a billionaire, was striking. Officially, she probably has some fancier title, but at this point she appears in the shadows. We’ll see how the series develops and whether or not Monica, played by actress Amanda Crew, takes on a stronger role and challenges gender stereotypes.

But, really? Among the group of guys in Silicon Valley who are struggling with a new start-up, they couldn’t have at least one female programmer? On the red carpet, Crew said that she admires Melissa Mayer as a strong female role model, and then added, “She’s with Yahoo, right?” I couldn’t tell if she was asking the journalists or making sure that we knew. This is probably less a reflection on Crew and more on the Silicon Valley bro culture in which Zuckerberg has name recognition outside the valley but Mayer doesn’t. 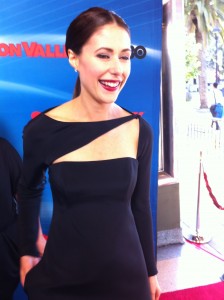 Amanda Crew on the red carpet for the premiere of "Silicon Valley." She plays a tech billionaire's assistant.

And it is that bro culture that hits you with a brick throughout the show. As a foil to the small group of start-up guys is the big evil nemesis tech company, Hooli, whose CEO is played by the talented Matthew Ross. An early scene takes place on a Hooli version of a Google Bus, those infamous private vehicles that transport employees to tech campuses. And it’s on a morning bus ride when the start-up guys look out the window and make fun of an older grey-haired woman on her bike, shunning her for being, well, an old woman.

This comes on the heels of the recent viral blog post by former Yahoo! executive, Susan Mernit, who recently described how she was brushed off at a tech party for looking like the young brogrammers’ Mom.

Throughout the show, though, I got the sense that the writers were trying to poke fun at Silicon Valley’s sexism and at the male characters’ lack of so-called lady luck. In the opening scene, one of the start-up guys is wearing a t-shirt with H.T.M.L in big block letters on the front with an explanation underneath that it stands for I know “How To Meet Ladies.” Not really, is the implication.

To celebrate the launch of their new company, the start-up guys have a small party. The founder hires a female stripper, who is so dismayed at the guys’ self-conscious and embarrassed absence of enthusiasm for her act that she quips, “God, I hate Palo Alto.” The crowded erupted in laughter at this line that seemed to mock the stereotypical bro-grammer’s lack of masculinity.

Yet the objectification of women never stopped. One of the characters has developed a “Nip Alert” app that has nipple-shaped radar. This mirrors and satirizes the Titstare app that drew critique last September at the TechCrunch Disrupt hackathon. But the writers framed these guys’ sexist behavior as pathetic, as well as an object of humor, rather than misogynistic. The developer of this app said in a sad voice, “I made a perverted sexist useless thing.” Then he quips that even the stripper “thought it was useless and sexist.”

But a more overarching message in the show about gender was embedded in what I have called Silicon Valley Ideology. The Internet and its Silicon Valley home have grown symbiotically with the rise of neoliberalism. One tenet of this free-market fundamentalism is a belief in people, individuals really, pulling themselves up by their own digital bootstraps to succeed. And Silicon Valley took this idea and ran with it through a gendered metaphor throughout the second episode: “Stop being a fucking pussy and be an asshole,” yelled one of the start-up founder’s friends to encourage him to dump another friend from the company because he doesn’t offer any “value.” To be fair, the setup of the show is that the nemesis company, Hooli, is an “asshole” while the start-up guys are wrestling with how to succeed in Silicon Valley by not being “assholes.” Yet, clearly, the opposite choice — of being a “pussy” is to strip away one’s masculinity, also not preferable in the show. 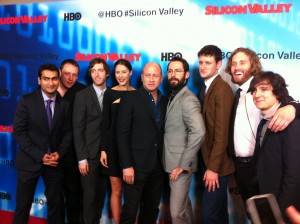 Most of the cast of HBO's "Silicon Valley" pose on the red carpet with the show's creator Mike Judge, center.

Ultimately, the objectification of women comes down to the p.o.v. of the show as being from the male characters. While they do struggle with their own masculinity, the lack of any strong female characters (so far) leaves much to be desired. And desire I do to like this show. I’ll still watch it, for purely academic reasons, of course. Does this satire simply reflect Silicon Valley sexism or contribute to it? I’ll continue to ponder if whether or not the show is reproducing or mocking the sexist culture in technology. Perhaps it’s doing both.

As an academic studying Silicon Valley Ideology, I still went to the after-party to do more “research” – here’s the evidence.

All photos by Jen Schradie

Big Data and the Survival of the Scientific Method
Is Moral Monday the Tortoise and Occupy the Hare?

3 Responses to HBO’s Silicon Valley: Where the Women Aren’t