Is Moral Monday the Tortoise and Occupy the Hare? 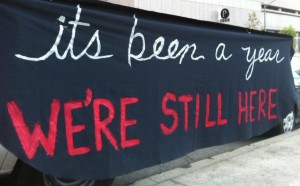 If you haven’t heard of the Moral Monday Movement, stay tuned. One year ago, on April 29, 2013, 17 people, including ministers, academics and workers, were arrested in the North Carolina legislative building in Raleigh. The 2012 general election ushered in a conservative take-over and super majority of the North Carolina General Assembly and a new Republican governor, resulting in a deluge of legislation that curtailed voting rights, refused federal Medicaid and unemployment funds, and restricted reproductive health services. A broad coalition of organizations responded with non-violent civil disobedience at the capital with weekly Moral Monday protests, which are led by the state’s chapter of the NAACP. The initial 17 arrested grew into about 1000 by the end of the summer’s legislative session, and thousands showed up for each protest. Moral Monday has not only grown and spread throughout the state to other North Carolina cities but also to other states, such as Georgia and South Carolina.

On this one year anniversary of the Moral Monday movement, I can’t help but think back on the first anniversary of Occupy Oakland, in particular, and Occupy Wall Street, in general. Both Moral Monday and Occupy directly challenged social class inequality and their ties to corporate America. Yet they are different – one survived and thrived and the other, well, had a boom and bust (though is not completely dead).

HBO’s Silicon Valley: Where the Women Aren’t
Is Facebook just another paperboy with bad aim?