In Defense of Tents – Place Matters for the Occupy Movement

By schradie on November 17, 2011 in Occupy, Police, Social Movements 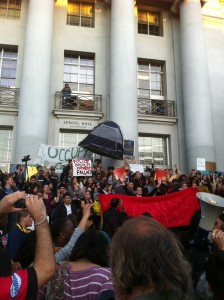 On Monday morning, I saw the sunrise over various police agencies dismantling (again) Occupy Oakland tents. That evening, I marched back at sunset with other protesters to take back the plaza. The night before, Denver and Portland authorities moved in to take down local occupy encampments and a swat team stormed an Occupy group’s takeover of an abandoned building in Chapel Hill. The next day, I watched a livestream of Occupy Wall Street being raided.

Then, on Tuesday, the Occupy Cal (University of California-Berkeley) and Occupy Oakland movements converged with a full-sized tent on a large stick as the symbol of the union, and the movement. Soon after, the joint (largest ever) General Assemblies voted to re-encamp the UC Berkeley campus. At this point, thousands of people were spilling out of Sproul plaza, and activists came in and ceremoniously placed five tents in the middle of the crowd to cheers. By this point, the crowd had swelled with a perimeter of people, many of whom were alumni of the famous 1964 free speech movement at the exact same spot, as the annual Mario Savio awards were about to be handed out. 10,000 people encircled, and in effect, revered a few camping tents. Why? Aside from their symbolism, tents matter.

Many in our Occupy Oakland movement question the focus and energy on tents, especially on public property. Why does camping matter? Why not focus on big banks rather than further bankrupting cities? Why can’t we do something rather than waste time and energy on camping? What is missing from these debates is how place matters. Clearly, the orchestration of the police raids on Occupy camps shows that place does matter for the 1%.

I first visited the Occupy Oakland site and the myriad tents in front of city hall with my son Liam, 8, in the afternoon during its first week. We soon found the kid zone, where he practiced capoeira, a Brazilian martial art, with new friends. I chatted with other parents and caregivers about how we all need more collective childcare support. Then, we wandered over to the food tent, where local businesses donate food which is prepared and handed out freely. But Liam was particularly fascinated with the bicycle operated generator which was giving power to the camp.

The Occupy Oakland camp is about many things, not the least of which is to build the type of society in which supporters envision. Activists are often portrayed in the media as “angry” or “against something” – which, well, we may be, as we see an escalating income gap, but the Occupy movement is much more than that.  It is about creating what protesters often chant “This is what democracy looks like.” It is about creating a more egalitarian and collective society. And it is this Occupy optimism that is spreading like wildfire across the country.

This institution building in a collective space is what many liberation movements have done around the world  – from the communal villages of health clinics and schools with the FMLN in El Salvador to the childcare and breakfast programs with the Black Panthers here in Oakland.  This organizing of local institutions is not just about providing basic services that the state or private sector is not – it provides a central and safe way around which people can begin to get involved in activism, as well as anchoring the organizing.

A public space also invites a broad, inclusive group of people, not just people who feel allegiance to one group’s physical space. In my documentary filmmaking days, I tried to have film screenings in public venues, such as an art house theater, rather than only in churches or union halls, which will attract one type of audience. Similarly, by having Occupy Oakland, Occupy Wall Street or Occupy Anywhere in an open public space, the movement is more welcoming to people who just want to stop by to check it out. As with me, that can lead to more and more involvement over time.

This public space for General Assemblies is also critical. These are when proposals are discussed, debated and voted on among hundreds, sometimes thousands, as to what Occupy Oakland, in this case, should do next.  It is mesmerizing to participate in such mass democracy in action in which anyone can speak and make proposals, rather than backroom deals and decision-making by the highest paid lobbyists.

More broadly, though, the message that the “occupy” in the Occupy movement sends to the strong believers in individual property rights, who, by the way, also tend to be the 1% who owns most of the property, is that we are taking back that which we have labored – whether a park in Manhattan, in front of city hall in Oakland or an abandoned car dealership in Chapel Hill, NC. Antonio Gramsci wrote over 80 years ago that these “wars of position” are a way not only to anchor political organizing but help inspire and mobilize the general public.

Tents are not just about camping or even squatting. They are about the significance of place and questioning ownership. The 99% recognizes this, which is why the Occupy movement and the encampment tactic have spread like wildfire. Wall Street and the Department of Homeland Security recognize this, which is why they have reportedly orchestrated raids the last week. What the 1% does not understand is that dismantling the tents will not put out our fire. Our longing for collective place – and action – are much deeper than camping out. Pass the collective s’mores, please.