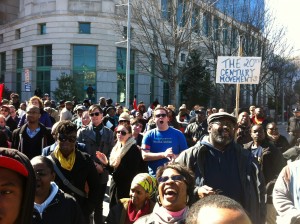 Where's techno-waldo in this recent demonstration?

The Pew Internet & American Life Project released a report today on social media and politics. It’s no surprise to sociologists that their findings reflect structural inequalities. Perhaps it was a bit of a jolt to digital utopianists, though. Aaron Smith, the author of the Pew report, finds social class divisions with political activity in both online and offline spaces, especially with social media.

We have known that the poor and working class are marginalized in the online digital public sphere, and that their voices are not heard at the same magnitude as elites. This report mirrors other research, such as my 2011 Poetics article (using Pew data no less), which shows that Americans with a high school education are much less likely to create and post online content than their college educated counterparts. This online content production across ten different Web-based activities included everything from video posts to blogs to Web sites. In other words,

Others have reported similar findings of political inequality, such those reported in The Unheavenly Chorus: Unequal Political Voice and the Broken Promise of American Democracy, a book by Scholzman, Verba and Brady (who also contributed to the Pew survey design).

Nonetheless, the Pew report offers current statistics right before the 2012 elections and post-Occcupy mobilization, and the report is incredibly comprehensive. As  I was reading through it,  I was impressed at the wide variety of questions they asked in their survey, such as respondents’ offline political behavior.

But what does this tell us about digital activism?

Clearly, I’m a fan of Pew, as I use their publicly available raw data in my own statistical analyses (i.e. they are an excellent open access source). But these data rely on surveys of Americans on what they report doing online. What about comparing how political organizations, rather than individuals, from different social classes use the Internet? How might class, race and political ideology – i.e. Tea Party versus rank-and-file unions – interact to affect online political practices and content?  In turn, do high levels of digital engagement enable more democratic organizing?

My current research project helps answer these very questions. I am studying over 30 organizations in one southern state – analyzing both the metrics of how much online activity these groups have, as well as what they are doing and posting onto their Web sites, Facebook, Twitter and YouTube/Vimeo. I’m also conducting interviews, ethnographic observations, and online content analysis (with the help of some incredible research assistants).

My results align with Pew in that I am finding  a substantial digital activism gap.  The digital divide matters. Organizations with more poor and working class members are much less likely to be online.

Unlike the Pew report, though, levels of online activity, though, do not always reflect offline activism, particularly for activists from marginalized communities. This is not to say that online and offline worlds are separate. But some of the most active groups also have the lowest levels of digital engagement. A few of the most politically engaged, and poorest, organizations on the issue I’m studying have no digital engagement – none, no working Web sites, little or no Facebook usage and absolutely no Tweets. So if we rely only on online data to track what is happening politically, we  may be missing the issues of concern of the poor and working class.

We are at risk of creating a wider political divide in the digital age, as a full 20% of Americans have never been online and many of those that are online only have occasional access.

It’s important to read the fine print of the Pew report. While it says that some Americans have gotten involved politically because of something they read about online, these people are already highly engaged in the political process. The Internet is not a magic potion that spontaneously creates Facebook and Twitter revolutions, inequality notwithstanding.

More and more Americans are using the Internet to engage politically, according to the Pew report on civic engagement. However, this should not change how we think about the political process – online tools often simply substitute for offline media, though they are more efficient and networked in how we used to communicate.  We just need to look at different tools than we did before.

But what about the questions I raised of digital activist content and the possible democratizing effects of the Internet for organizations? Stay tuned for more of my finding at a conference, journal, blog post or Twitter feed near you.

An article by Dana Hull in The San Jose Mercury News cites my analysis of the Pew report: http://www.mercurynews.com/business/ci_23101813/social-networking-sites-play-more-prominent-role-politics